A Colony Of African Honey Bees Found In My Garden 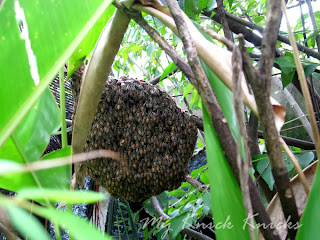 I woke up one morning and went to my unkept little side garden to see what has happened to all my plants...I have neglected my garden since my surgery.  I depended on mother nature to water my plants but due to dry season , some of the plants are dying of thirst.  I took the hose and started watering the dying plants and gosh to my horror, I discovered this colony of African Honey Bees  . I ran into the house and took out my camera and started shooting away.   After which I told hubby about the hive ....lucky I took a picture before informing him or I will never be able to take a shot of them for he warned me not to go near them....LOL!  He called the fire deparment and got the men to come blast them off :P cruelty to animals ?   Two firemen came at night to blast them with just a can of ' Baygon ' .  As they spray the pesticide on them, they use a lighter and blast them off.  Within a few seconds, they bees were killed and some of my plants were burnt too.   Don't try doing this yourself...call the Fire Department and they will send their men over to investigate and they will deal with it the correct way. The bees looked menacing...don't they?