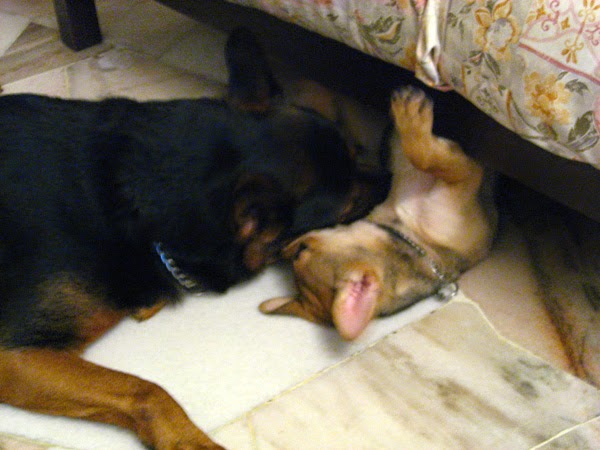 The huge gentle giant  ( a cross between a Rott and Alsatian ) named Mr.Chaco is  husband  ' four legged son ' and the other cute Miss Chief /MC  is my daughter's pet dog ( a  cross between a Rhodesian Ridgeback and a mongrel ).  When my daughter was in Melbourne attending a conference, we babysit Miss Chief.  Whoa, the house was in chaos , they chased each other and played rough with each other. Needless to say, the cute Miss Chief ( aptly named ) was the boss in the house.  My poor Mr.Chaco is the submissive one and always give in to her whether in games or during meal times.  MC has the say...she will not allow Mr.Chaco to come near her food and she is a poor loser.   She will sit and "  AOWWWWW...... at him in her famous Rhodesian Ridgeback way of command.  It was a joy to see the both of them together.

Miss Chief was with us for almost a month and during those days , my husband ordered some pet supplies from Entirely Pets for Miss Chief to take home with her.  Supplements and some dog treats which we can't get from KL.

We are happy Miss Chief is happy in her new home in KL....she is a fast learner and able to perform tricks like a circus dog :) and getting rewards from her new mistress ....those dog treats for Entirely Pets really did wonders !   I hope to see her doing the tricks taught by her new mistress when I  next  visit her !