Succulent Plants - They Are So Pretty 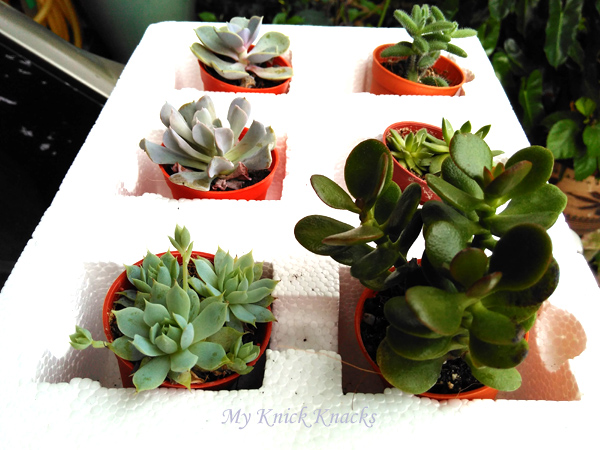 Succulents are popular for two simple reasons: they are beautiful and nearly indestructible. I am into succulents now because they are hardy and easy to take care and I have bought a few mini succulents back from KL during my last trip to Semenyih.
I asked a dear friend to get them for me and she took pictures from the nursery and asked me which one I wanted...such a great friend. With whatsapp...it is so much easier to get stuff for friends..just point , shoot and send :)  and here I would love to share with you the ones she bought for me on my behalf.
this excerpt is taken from about home
A succulent is any plant with thick, fleshy (succulent) water storage organs. Succulents store water in their leaves, their stems or their roots. These plants have adapted to survive arid conditions throughout the world, from Africa to the deserts of North America. This adaptive mechanism has resulted in an incredible variety of interesting leaf forms and plant shapes, including paddle leaves, tight rosettes, and bushy or trailing columns of teardrop leaves.
As a group, succulents include some of the most well-known plants, such as the aloe and agave, and many almost unknown plants. Succulents make excellent display plants in dish gardens.
No matter what kind of succulent you're growing, the rules are pretty similar between the different species.
Here are the general rules for growing top-quality succulents:
Light:
Succulents prefer bright light, such as found on a south-facing window. Watch the leaves for indications that the light level is correct. Some species will scorch if suddenly exposed to direct sunlight. The leaves will turn brown or white as the plant bleaches out and the soft tissues are destroyed. Alternatively, an underlit succulent will begin to stretch, with an elongated stem and widely spaced leaves. This condition is known as etoliation. The solution is to provide better light and prune the plant back to its original shape. Many kinds of succulents will thrive outdoors in the summer.
Temperature:
Succulents are much more cold-tolerant than many people assume. 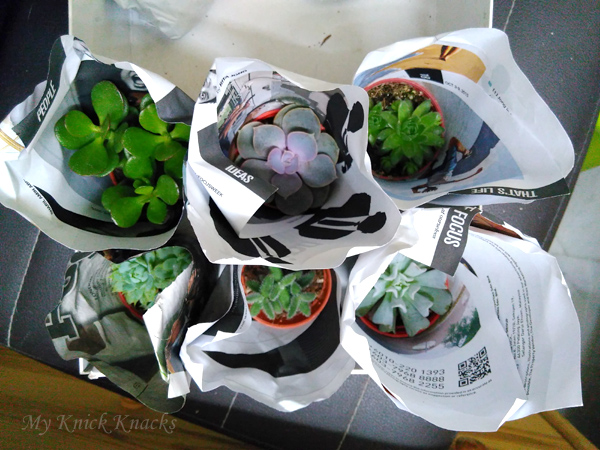 bought a few succulents from the
Jade , Aeonium , Echeveria family 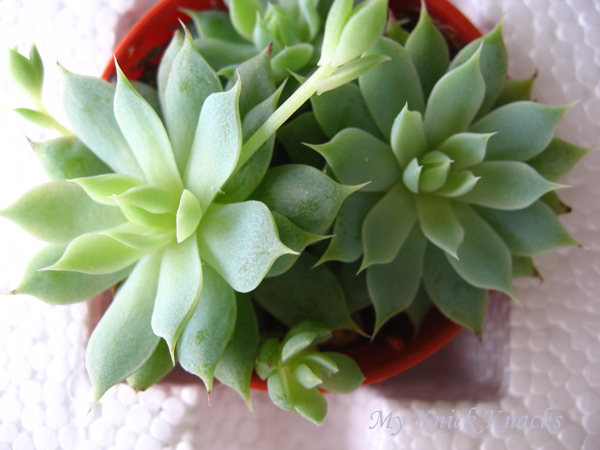 Graptopetalum Macdougallii
is a plant belonging to the succulent genus Graptopetalum.
It is native to Mexico. It grows on shady rocks 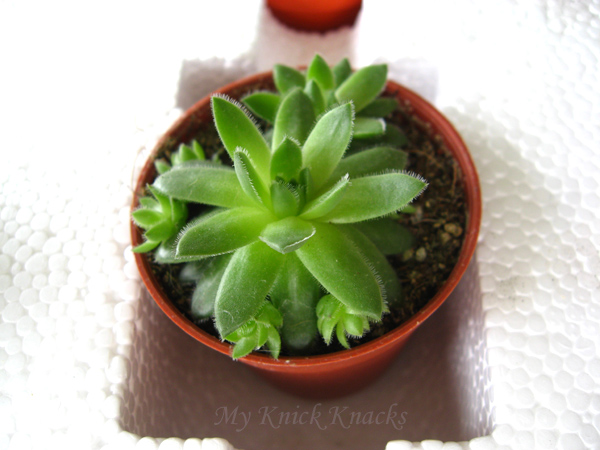 Sempervivum (sem-per-VIV-um) (Semps, Hens and Chicks, Houseleeks)
are very popular cold hardy and drought tolerant succulents.
They have many different textures and forms:
from velvety, wooly, and satin, to fringed, tufted, and spidery webs.
Some are large (up to 4" or more in diameter),
others are tiny (only 1/4" diameter ).
Most produce tight clumps that form interesting mounds.

Colors range from shades of green to silver-blues to
the darkest of purple, to delicate pinks.
Most of the varieties show their best color in the spring
and again in the fall.
There are also many forms, including rosettes,
tight balls (rollers), artichoke look-a-likes,
and some that have the appearance of stones.

Sempervivum will produce multiple “baby chicks” per growing season.
Some of the cultivars are more prolific than others but
you can usually count on at least four chicks per season.
You can leave them attached to the mother hen to
fill in your garden planting, or you can remove the chicks
and start a new planting elsewhere.
They grow best in hardiness zone 5 (-20F) and up 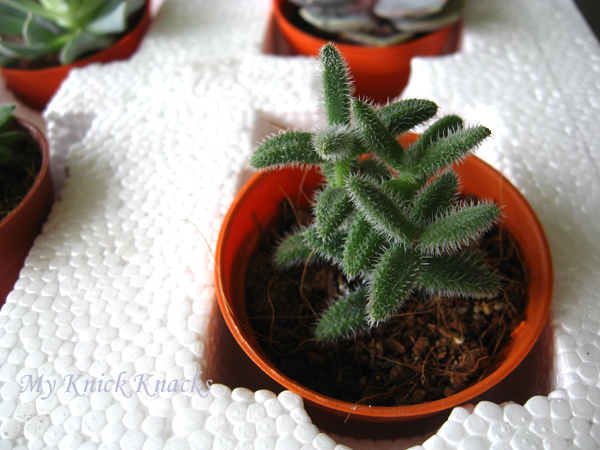 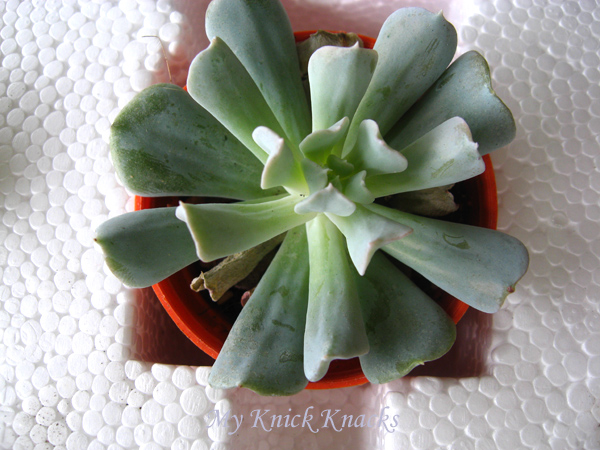 Echeveria runyonii cv topsy turvy -
A fast growing rosette-forming succulent with pale blue-gray leaves
that curve upwards and are strongly inversely-keeled on the lower surface with
leaf tips pointing inwards towards the center of the plant.
This interesting Echeveria has become a common sight in
Southern California succulent collections, likely because
it offsets profusely and plantings quickly become mounds with
individual rosettes to nearly 1 foot across.
Bright orange and yellow flowers rise above the foliage on
tall arching inflorescence, usually in late summer or fall.
Plant in a well-drained soil in full sun in coastal gardens with
some light shade in hot climates. Water occasionally.
Hardy to about 25° F. This plant was named by
past Huntington Botanic Garden Director Myron Kimnack.
The genus Echeveria was named to honor
Mexican botanical artist Atanasio Echeverría y Godoy in 1828 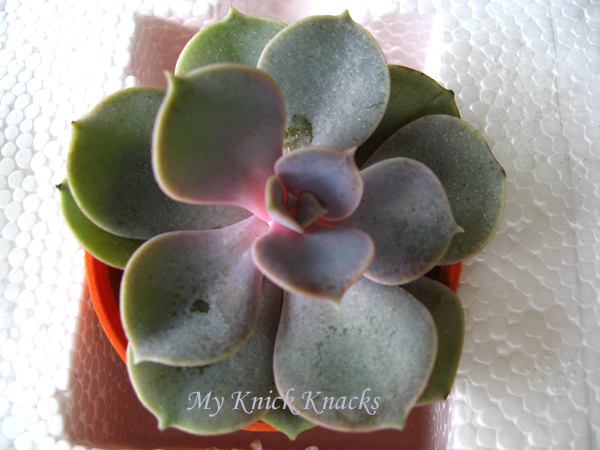 Echeveria 'Perle Von Nürnberg' -
A beautiful rosette-forming succulent that has interestingly
colored acuminate leaves that are a pale grayish brown with
pink highlights and have a white powdery dusting,
sometimes referred to as pruinose.
The leaves overlap nicely in 5 to 6 inch wide
solitary rosettes that eventually grow up on a slender stem.
The flowers, which appear in summer on 1 foot long
reddish-stemmed inflorescences, are a corral pink color on the exterior
with a yellow interior. Plant in a location that has good drainage or
in a container in full sun, shade or a bright location indoors
(pink colors in leaf are enhanced by bright light) and
irrigate occasionally to often. Hardy to 25°F.
This hardy hybrid echeveria is noted for its tolerance to
a wide range of conditions including regular irrigation,
moderate frost, inland heat and considerable shade
but looks the most attractive when younger so it benefits
from being deheaded and rerooted every 3 to 4 years - a nice plant in a pot.
This plant is a hybrid between Echeveria gibbiflora 'Metalica' x E. potosina (now E. elegans)
that was created by Richard Graessner of Perleberg, Germany in the 1930s,
who was considered a famous succulent plant grower in his time.
It has long been admired by succulent growers though the cultivar name
is sometimes anglicized as 'Pearl of Nurnberg' as was done
when it was distributed by the International Succulent Institute (ISI) in 1979
as ISI 1138 Echeveria 'Pearl of Nurenberg'.
The ISI recommended it for growing in a container, and
described it as one of the most beautiful plants that one can grow. 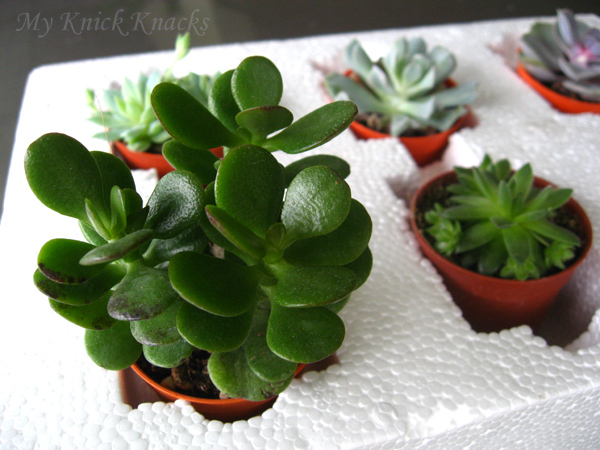 Crassula Ovata
commonly known as jade plant, friendship tree, lucky plant, or money tree,
is a succulent plant with small pink or white flowers.
It is native to South Africa and Mozambique, and
is common as a houseplant worldwide.
It is sometimes referred to as the money tree; however,
Pachira aquatica also receives this nickname.

The jade plant is an evergreen with thick branches.
It has thick, shiny, smooth, leaves that grow
in opposing pairs along the branches. Leaves are a rich jade green,
although some may appear to be more of a yellow-green.
Some varieties may develop a red tinge on the edges of leaves
when exposed to high levels of sunlight.
New stem growth is the same color and texture as the leaves,
but becomes brown and woody with age. Under the right conditions,
they may produce small white or pink star-like flowers in early spring