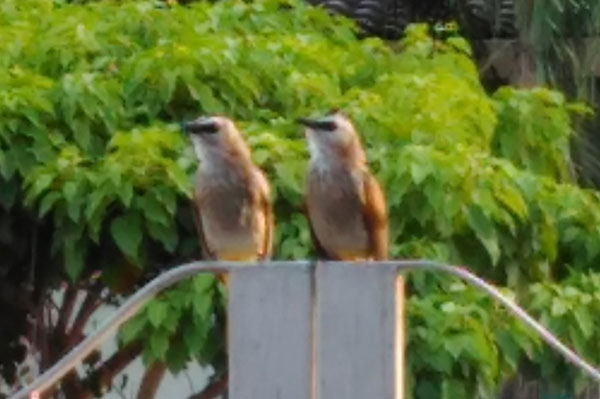 The yellow-vented bulbul (Pycnonotus goiavier) is a member of the bulbul family of passerine birds. It is resident breeder in southeast Asia from southern Thailand and Cambodia south to Borneo and the Philippines. It is found in a wide variety of open habitats, but not deep forest. It is one of the most common birds in cultivated areas. They appear to be nomadic, roaming from place to place regularly.


The yellow-vented bulbul builds a well-camouflaged but fragile, loose, deep, cup-shaped nest from grass, leaves, roots, vine stems, and twigs. The nest is untidy on the outside, but it is neatly lined with plant fibers. It may be built in a wide range of places from low bushes to high trees. This is a species adapted to humans and may even nest in gardens. The yellow-vented bulbul lays 2–5 eggs in February to June. The yellow-vented bulbuls eats berries and small fruits. They also sip nectar, nibble on young shoots, and take some insects.


Recently, a pair of bulbul birds built their nest on my bamboo plant.  I have lost count as to how many pairs have come to build their nest in my garden. This pair may be the 8th pair thus far BUT they are the first pair for 2017.  They possess great teamwork qualities which greatly amazes me. From building the nest to hatching the eggs, to feeding the nestlings, they really worked non-stop..taking turns to feed the nestlings after they were hatched. Married couples should look upon these bulbul birds as role models for great team work and success !

The moment they have decided which part of the bamboo plant to build the nest, they will be flying in and out of the porch ,where my bamboo plant is , carrying twigs in their beaks to start building the framework for their nest.  Amazing, how they can build a nest in two days.  Here are some pictures I took to show the success of a great team work! 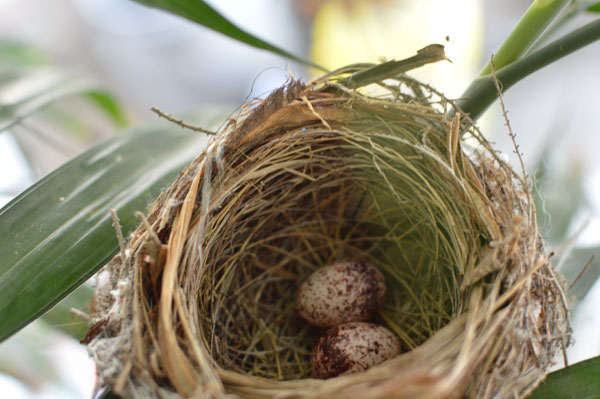 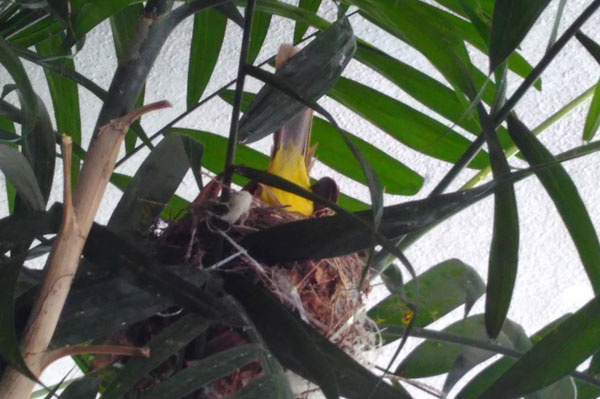 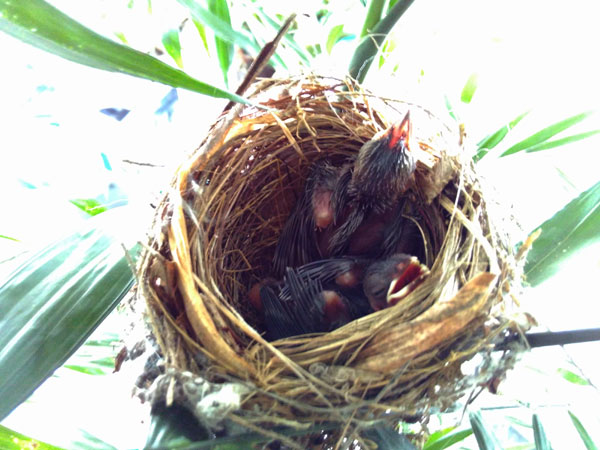 by the end of two weeks , the nestlings were hatched and
these are more than 5 days old chicks :) 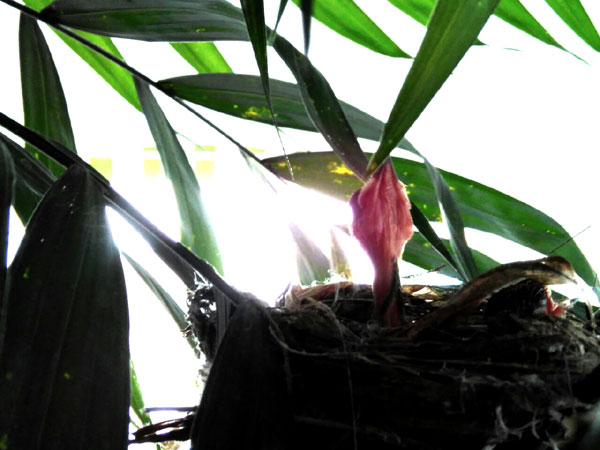 waiting for the parents to feed them with worms 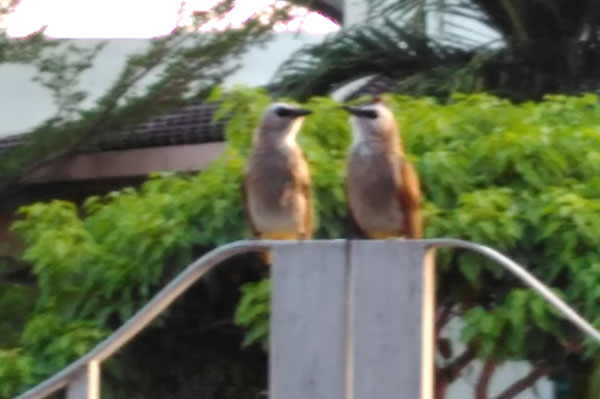 when they are not feeding the chicks, they were seen perched on the gate,
guarding their chicks from afar and having some loving moments together
SO LOVING! 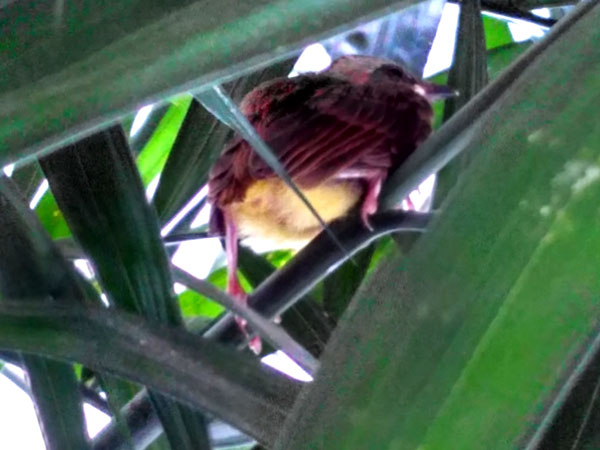 under the tender loving care of the parents , the chicks soon learns to
fly....the act is amazing and I was there to watch the whole process
the parents will be tweeting and making a lot of noise to encourage
the chick to fly and the mother bird will show the chick how
to fly.....it is indeed a joy to witness the chicks taking their first flight :) 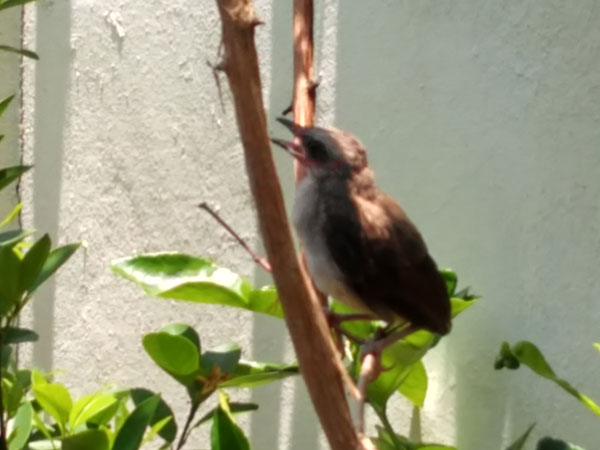 first flight is not smooth, the chick landed on my rangoon creeper
the mother bird will tweet even louder ....encouraging the chick
to try flying again...its like telling her chick not to give up
and finally , the chick manages to fly off and join the parents
and the happy family flew off....the sky is the limit

A beautiful sight to witness......I guess the parents will still be
teaching the chicks how to look for worms and teaching them
about survival :)

Are You Looking For Dynamic Microphones? 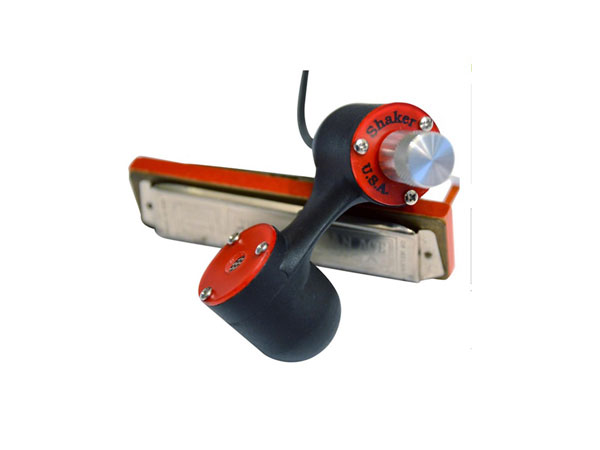 Our friend Joe has taken an interest in playing the harmonica. It is easy to play and it is quite cool to watch him play the harmonica besides the keyboard.  Joe is not only a talented singer, he plays musical instruments well too.  His recent addiction is playing the harmonica.  Now he is looking for a dynamic microphone  for his harmonica . He is going to play songs with his harmonica during his performance at the hotel which he is contracted to sing for the whole of 2017.  Something new for him and I am sure the patrons will be happy with his perfomances.  Everyone will be looking for something new and with a dynamic microphone, he will bring out the music to an even greater level.

He loves the color of this Shaker Microphone and he can't wait for it arrives :)

WHO IS A TRUE FRIEND ? 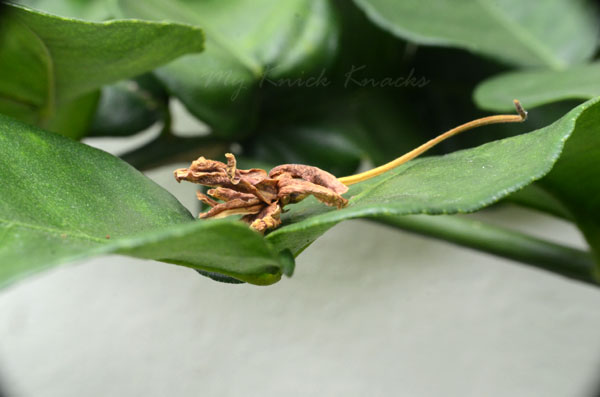 A TRUE FRIEND IS.....
ONE WHO WON'T JUDGE YOU,
ONE WHO WILL KEEP YOUR SECRETS A SECRET,
AND
ONE WHO WILL ALWAYS BE THERE FOR YOU.

Email ThisBlogThis!Share to TwitterShare to FacebookShare to Pinterest
Labels: Quotes, True Friend, Who Is A True Friend

Mating Habits Of The Common Housefly 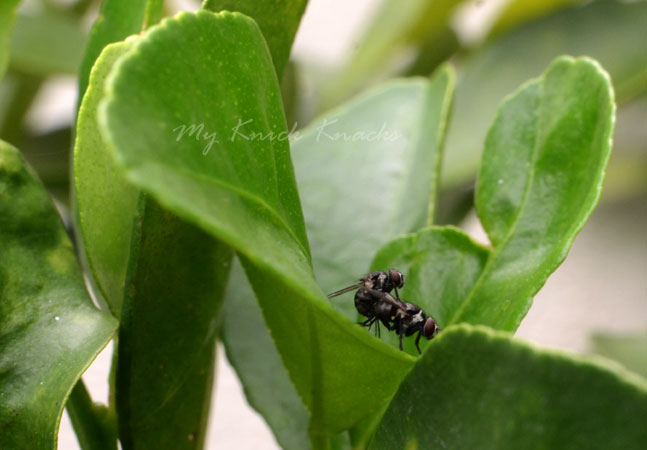 At the age of almost touching 60, I find I still need to learn more as the days pass by :)  I was in my lil space looking for insects to practice my photography skill and found this pair mating :p   I  became an unintentional peeping tom and this is what I captured on my camera  LOL !

Mating Habits Of The Common Housefly - excerpts taken from here
Houseflies live only 15 to 30 days, but they devote a significant portion of those days to reproduction. Mating starts with a short courtship process initiated by the male. After the female’s eggs are fertilized, she flies off in search of the nearest pile of smelly manure or garbage and lays her eggs.


The male is in charge of housefly courtship. He identifies available females by the pheromones they produce. A pheromone is a chemical signal, in this case one that lets the male know a female fly is sexually mature and ready to mate. The male isn’t very subtle when he shows his interest. He bumps into the object of his affection when she’s flying, although mating takes place on the ground or another stable surface. If both flies are already on a stable surface, the male jumps on top of the female. The male shows his intentions by spreading the female’s wings and touching or lapping her head. If the female isn’t interested, she flies away or shakes the male off her body.

If a female fly wants to mate, she puts her ovipositor inside the male fly’s genital opening, located at the bottom of his abdomen. The ovipositor is a long thin tube that extends from the end of the female’s abdomen. When she isn’t mating or laying eggs, the ovipositor stays hidden. Once the ovipositor is in place, the male releases sperm, which travel through the female’s reproductive tract to fertilize her eggs. The entire mating process lasts from 30 minutes to two hours, notes Animal Diversity Web.


The Bigger the Better


Females usually mate only once, while males mate with many females. Males have definite preferences when they choose females. Researchers at Chungnam National University studied housefly courtship and mating practices and discovered that males preferred to mate with large 7-day-old females. It might sound as if finding a female would be an easy task, but some males mistakenly target other males or even inanimate objects. This can happen because some females don’t produce high levels of pheromones and males can confuse small dark objects for other flies.

From Egg to Fly

The female uses her ovipositor to make a hole in the manure, garbage or other decaying material she has selected and releases her fertilized eggs. She expels up to 150 eggs at one time and can lay 500 over the course of three or four days. Eggs hatch into wormlike larvae, commonly called maggots, eight to 24 hours after they’re laid. The maggots feed on the manure, garbage or other organic material for about five days, and then form pupae, hard shells that protect them as they transform into mature flies. After four days an adult housefly emerges from each pupa. The young flies begin mating just one to two days later.

Email ThisBlogThis!Share to TwitterShare to FacebookShare to Pinterest
Labels: Mating Habits Of The Common Housefly 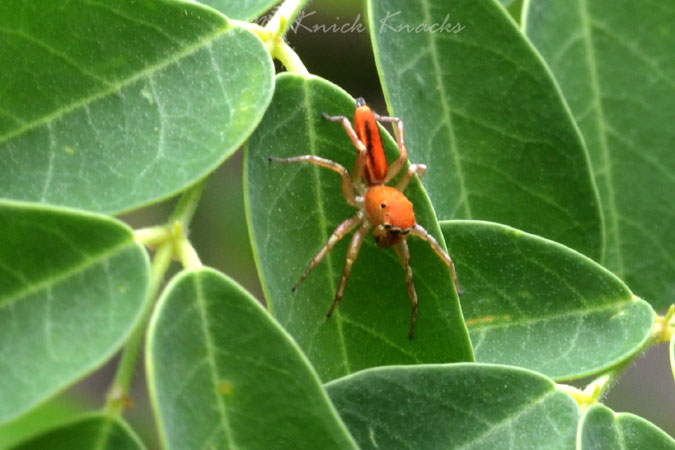 This garden spider has a nice lobster color. I have yet to find the scientific name for this specie of spider...very tiny and quite adorable.  I took this shot with the Sigma 30mm 1:1.4 DC lens with Raynox dcr 250 close-up len attached.  Still lots to learn on handling the camera ,in order to capture a good picture, I need more practices.  This little fellow is moving fast. I need to set shutter speed to a bigger number in order to get a sharper image of the spider I guess :p 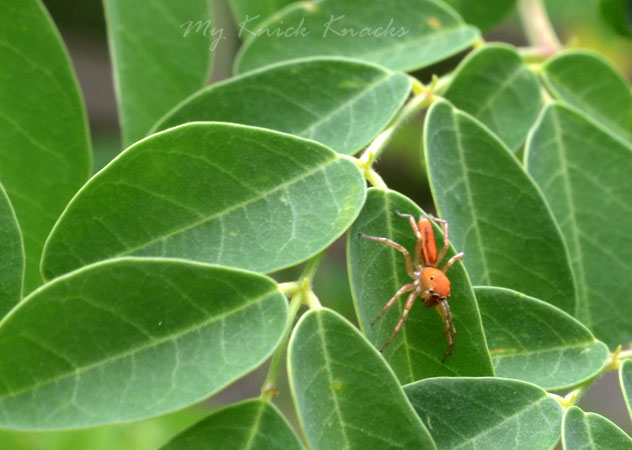 Happy International Women's Day to all 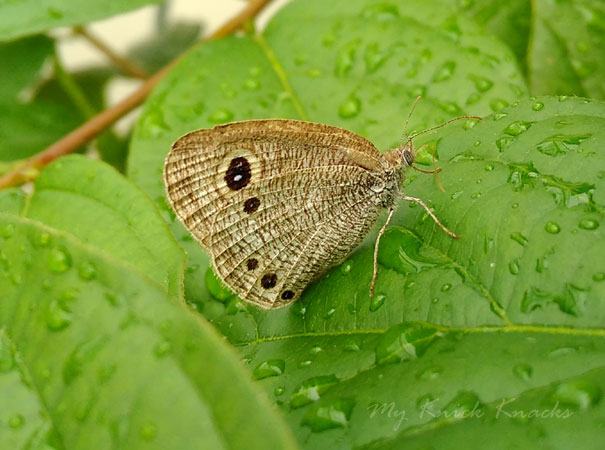 
Happy International Women's Day to all :)
Follow your passion ,
It will lead you to your purpose 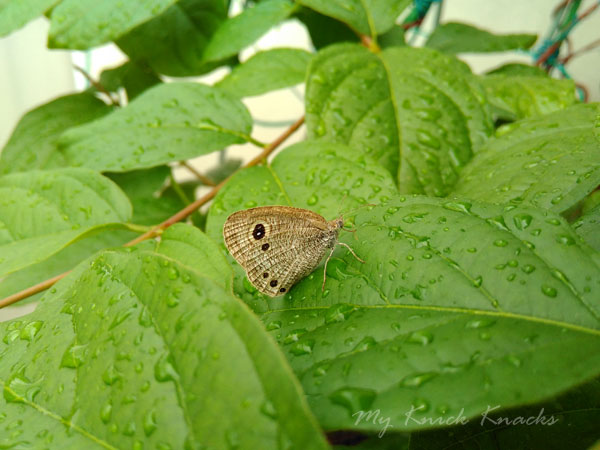 With tech21 at MF , you can search for any products that is available on Musician's Friend website. And you can check the lastest list of musical instruments added for shipping internationally . Purchasing for musical instruments online has made it so much easier and when shipped to your destination, you can always track the item you ordered.

Check on their hot deals online and be sure to be the early birds to grab the hot deals. For our musician friend Joe, he will make sure he is the early bird and we are not surprised whenever he show us his lastest purchase. He has no problem with their delivery system , he just have to log in to tech21 at MF  and he will be able to track for the product he wants and whether they can ship the instrument to him . Life is so much simplier with online shopping.
Posted by My Knick Knacks at 3:04:00 pm No comments: